This year I decided to move 2 of my local Git-/SVN-projects to my Github account. The SVN-Project (mccm-project) I started in early 2012 for MCCM Feldkirch. That time I basically converted the bespoke MCCM homepage to wordpress. Later – in 2015 – I started my own blog codingcookie.com also powered by wordpress. In 2015 I already used Git a lot and therefore I started a local Git-repo to maintain the codingcookie.com code base (coding-cookie-project). This article describes 3 thinks I dealt with while I moved both projects to Github:

The upcoming chapters desribe the whole procedure I went through targeting the mccm-project. For the coding-cookie-project the procedure was the same beside that there was no need to convert it to a Git-repo first.

Convert the SVN-project to Git-repo

My authors.txt only contains my user info as I was the only author:
edi = Eden33 <eduard.gopp@gmail.com>

The map file together with git svn clone can be used to clone the SVN-project into a Git-repo. If your project is based on the standard SVN-layout (3 folders: branches, tags and trunk) you can use –stdlayout parameter. If it has a different folder structure you must provide –trunk, –branches and –tags as part of the clone command.

My mccm-project had a standard layout. However, the first clone command failed like this:

After some research I enabled svn:// protocol with help of svnserve.exe available in TortoiseSVN:

And changed the protocol in the git svn clone command to svn protocol and it worked:

Beside the fact that a converted project must be reviewed (comparison of commit messages; branch/tag comparsion) here are few things I came across while convertion.

New lines
git svn clone doesn’t care about line endings and transfers them like they are maintained in SVN (tested for Git version “2.16.1”): See also this post on Stackoveflow. However, later in Git it is quite common practice to control it right from the very beginning how Git encodes and takes care about line endings maintained in the repo: For further information click here for a good article.

While I maintained the mccm-project in SVN I was not picky and didn’t care about it. Some of the files in the project were enconded with CRLF (as I created them on my windows computer) and some of them were encoded differently as their origin was not windows. Finally I decided to setup my Git project more clean and normalized all new lines of text files with LF like this:

As already explained in the “Introduction” I removed more than just the dump files and the wp-config.php parameters. The mccm-project initially had approx. 5 GB with all images and galleries included. Github had a disk quota of 1 GB while writing. Therefore I decided to also remove the images folders. The list of data removed from revision history:

To get this job done I jused BFG Repo Cleaner, a simpler and faster alternative to git filter-branch command. BFG requires that your last commit in HEAD contains all the changes you want to apply with the tool afterwards. This means I deleted all the folders and files mentioned. In addition removed all data from wp-config.php which was sensitive. This I commited to the HEAD (0ff5c1e). After that I executed the following on command line: 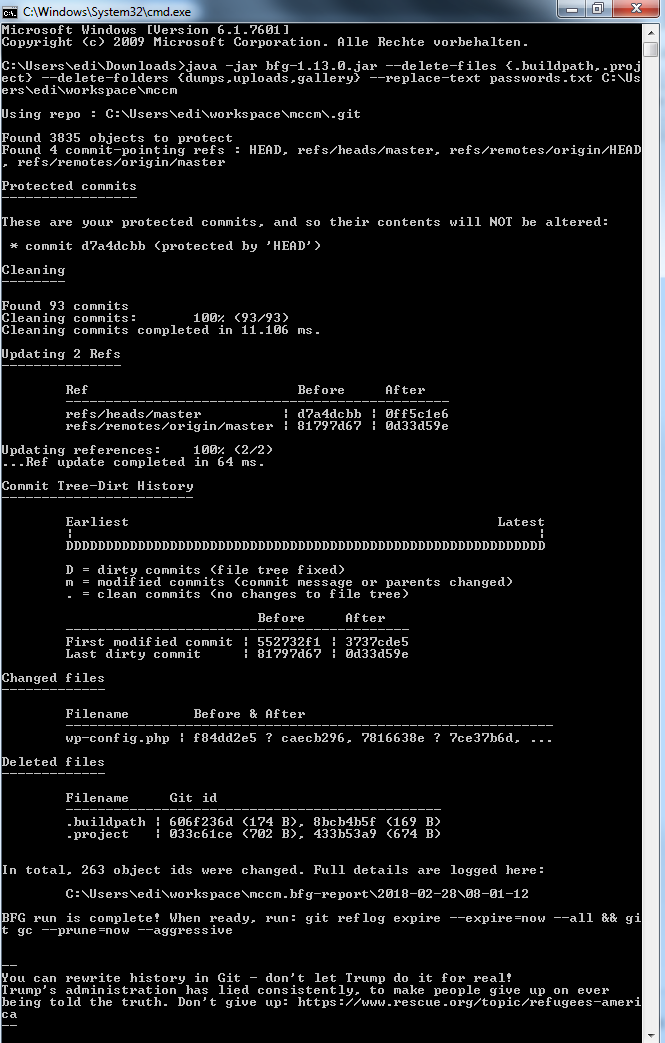 Finally I executed the git reflog/gc command like (requested in last screenshot) to delete the cleaned up data from my local working copy.

It’s straight forward. First I created a project in Github and copy the remote URL provided in Github web interface. Next the screenshot I made which describes the whole process.

Converting a project from SVN to Git is not hard. As explained in this article there are some things you should be aware of while you deal with git svn clone. From my point of view the new line normalization is a hot topic if you haven’t taken care about it previously in SVN. Furthermore you should be careful if you work with BFG Repo Cleaner. I can confirm it’s super fast. However, your input must be correct to end up in correct history rewrite. So always check the log output on console while executing BFG Repo Cleaner and tripple check the end result (=Git history).